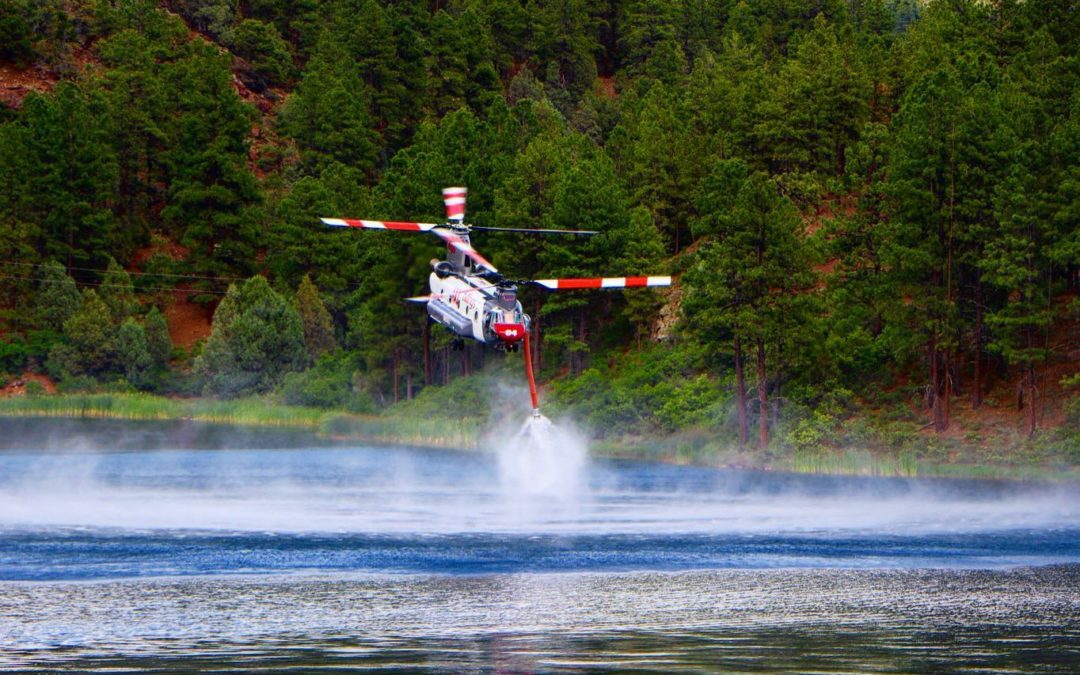 Billings Flying Service has been chinook helicopter fire fighting since 2014, with the CH-47D Chinook helicopter. With over 30 years of experience operating heavy lift helicopters, we were thrilled to introduce the Chinook into our fleet. Flying alongside our CH-47Ds are a UH-60A Blackhawk and Bell 206 Long Rangers. Prior rotorcraft that we have owned and operated include Sikorsky S-61s, SA330 Pumas, UH-1 Hueys, Bell 212s, and AS350 Astars.

Introduced in 1962, the CH-47 has been operating both domestically in the United States and Internationally for nearly 60 years. During that time and continuing today, military operators have leveraged the capabilities of the Chinook to fight wildfires. United States National Guard units and disaster relief operations deploy the CH-47 in emergency areas with external buckets for fire suppression and can evacuate stranded individuals within the fuselage. Other military aircraft are used in the same way, including the C-130 Hercules. The C-130 Hercules houses a MAFFS internal tank system which can drop up to 3,000 gallons of fire retardant.

Prior to 2013, the CH-47 was used to support aerial firefighting by military entities only. That is unlike the UH-1 Huey which had been auctioned off since the 1990’s to commercial companies and repurposed for full time aerial firefighting. That changed in 2013 when the U.S. Government decided to auction off a line of CH-47 Chinooks. Four commercial companies (Billings Flying Service, Columbia Helicopters, Construction Helicopters, and Coulson Aircrane) took the leap and added the CH-47 to their fleet, beginning a new era for the CH-47 Chinook.

The CH-47 Chinook has three external hooks to haul cargo. In the case of firefighting, the main center hook can be used to carry a long line and commonly known bambi bucket. Other commercial versions of the CH-47 have internal tanks with actuated doors on the belly of the aircraft and a snorkel to fill up the tank.

Bucket ships are rotorcraft that carry water in a large bucket suspended from the belly of the aircraft. This is the most common method of rotorcraft aerial firefighting. Long lines, measuring between 100 and 200 feet, are attached to the CH-47’s center cargo hook. The long line not only connects the bucket to the aircraft physically, but also electrically for power and signal transmission. Within the bucket is a pump and valve system. When the signal is sent through the long line, power is applied to the pump which fills the bucket. When a separate signal is sent through the long line, the valve at the bottom of the bucket opens, allowing a metered amount of water to drop on precise locations. The CH-47 can haul buckets that carry up to 2,700 gallons of water depending on temperature and elevation. A full bambi bucket can be completely released within three seconds.

The development of the CH-47 helitanker came soon after the introduction of the CH-47 into the commercial sector. A helitanker is a helicopter with an attached tank system to deliver water. Helitankers are preferred in certain areas due to lower risk of long line detachment. Helitankers can be at a disadvantage if water sources or fires are in space constricted areas. Rather than being a hundred feet off a body of water, a helitanker must come within feet of a body of water to fill the tank.

While each helitanker is different, the Billings Flying Service CH-47 helitanker can support up to 2,500 gallons per trip. The BFS tank was developed in partnership with Kawak Aviation with the ability to hold both water and foam concentrate. The tank is installed in the fuselage with an underbelly sliding door to improve drop patterns. The tank can be filled within 40 seconds using a snorkel with a pump on the end.

Recently, interest in aerial firefighting at night has been renewed. Advances in technology, successful pilot programs, and willingness by government bodies to operate at night are moving night vision flying forward.

Whether a bucket or tank ship, each Billings Flying Service CH-47 is equipped with onboard data collection systems. Each trip to fill and drop water is tracked using GPS coordinates, air speed, and elevation. Water fill and drop events are recorded detailing gallons and location. Data collection on the CH-47 allows the customer to actively manage and track the performance of each rotorcraft on a wildfire.

Whether a bucket or tank ship, night vision capable, or equipped with data collection systems, the CH-47 Chinook is one of the most capable firefighting helicopters available today. If you are interested in CH-47D Chinook aerial firefighting services, give us a call at Billings Flying Service: 406.252.6937.