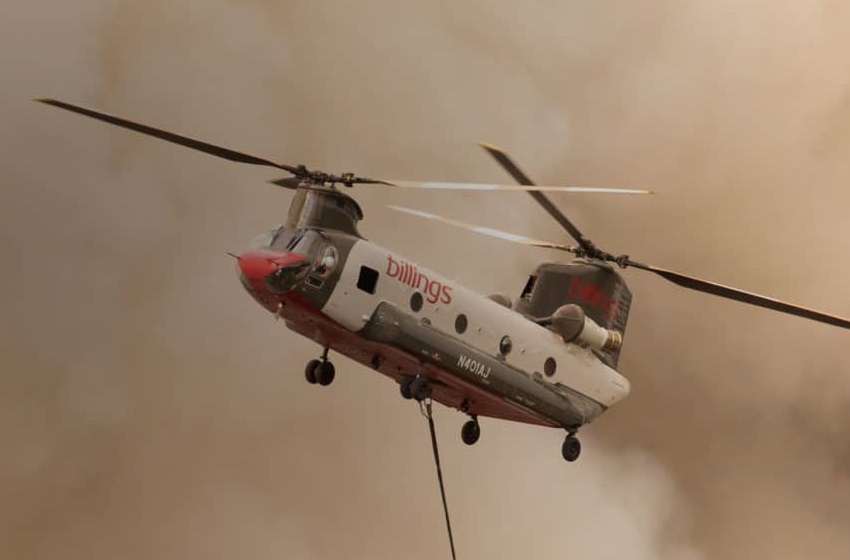 For decades, the CH-47 has proven to be reliable and effective. Operations of the Chinook have spanned across the globe, from arctic climates to humid rainforests. Most recently, the Chinook has been the workhorse for the United States military in the arid climate of the middle east. The CH-47 is known for its ability to accomplish multi-faceted missions, carrying both cargo and personnel. Originally designed to be a military aircraft, the CH-47 can lift Humvees, cargo nets, cannons, boats, shipping containers, and even other aircraft in the most extreme environments.

In the commercial sector, the CH-47 has been re-purposed to lift water for aerial firefighting, materials for construction projects and disaster relief, support for electrical, gas, and oil utilities, and cargo for remote locations. Billings Flying Service, the first type certificate holder of the CH-47 and leading U.S. Interagency Type 1 operator, specializes in the operation of the CH-47 and can support your needs in each of these categories and beyond.

Whether you need to lift a humvee or a pedestrian bridge, here is a list of ten items that shows just exactly why the CH-47 Chinook is the best heavy lift helicopter in the industry.

The dual rotor system boasts a combined maximum of 10,138 horsepower. With six blades, two engines, and five transmissions, the CH-47 can lift 26,000 pounds at sea level. For perspective, that means the chinook can lift up to 5 Ford F-150s all at once. The 26,000 pound capability of the chinook allows the aircraft to lift large HVAC units, utility poles, and large bundles of food, health care supplies, and water to those in need.

Performance inevitably decreases with a rise in elevation and changes in temperature due to fundamental internal combustion reaction rates. Much of our Chinook’s work occurs at higher elevations, such as dropping water on a fire in national forest or lifting a pallet of fencing material into a remote mountain ranch. For example, at 5,000 feet above sea level and 30 degrees C, our Chinook can lift a maximum of 22,000 (10,000 kg) pounds. This is 4,000 pounds less than the sea level maximum of 26,000 pounds. The industry’s next best available alternative is the S-64 Sky Crane. At the same altitude and temperature, the S-64 can lift 10,500 (4,770 kg) pounds. With such a wide gap in lift capacity at altitude, the CH-47 Chinook differentiates itself from other heavy lift helicopters and presents a more effective solution to lifting large loads.

Tandem rotor helicopters are specially designed to combine heavy lift capabilities with increased maneuverability. With the power from the 5,000+ hp T55-714 series engines, the Chinook’s driveshafting and engine, combining, forward, and aft transmissions translate mechanical energy to the swashplate, rotorhead, and blades. This seamless integration of drive components lift the aircraft vertically and propel the ship forward in a way unique to the CH-47, CH-46, BV-107, and BV-234. The CH-47 can safely hover in place, quickly place items within tight tolerances, remain stable in harsh conditions, nimbly navigate through complex geographies, and perform rolling landings and take-offs that most rotorcraft cannot accomplish.

Heavy lift helicopter operations by the CH-47 Chinook are completed through the use of the aircraft’s redundant systems. Designed to continue operating under single system failure, component redundancy improves aircraft safety and reliability. From avionics and electrical, to hydraulics and powerplant, the CH-47 has two systems to keep flying and accomplish the mission.

Heavy lift helicopter missions operate on tight timelines and schedules. Critical payloads need to be delivered quickly and effectively to accomplish the goals of the mission. Often, missions require multiple trips between HQ and the final destination. In these instances, not only can the CH-47 carry larger payloads each trip than the next best option, but the Chinook can also complete the roundtrip journey in less time. Max cruise speed of the Chinook is 140 knots, compared to the S-64’s 115 knots. For example, with a roundtrip journey of 4 miles, the Chinook can deliver 35,000+ gallons of water per hour compared to the 24,000+ gallons of water per hour that the S-64 can deliver. While Billings Flying Service attempts to maximize efficiency of every operation, safety remains the first priority and is of upmost importance during heavy lift helicopter operations.

Billings Flying Service is incredibly proud of its ability to offer the services of the CH-47 heavy lift helicopter at an affordable rate. While the cost per hour of the CH-47 is higher than most other smaller aircraft such as the UH-60, S61, and Kmax, the calculated unit cost in scenarios approaching the CH-47’s max lift weight makes the platform an economical choice for heavy lift operations. This is due to the combination of purposeful aircraft design, available supply chain for service and maintenance, and the collective worldwide military and commercial effort to keep the CH-47 flying.

The CH-47 boasts redundant systems across the entire airframe from avionics to powerplant and accessories. Multiple systems and components that serve the same function allow the aircraft to fly safely and efficiently while conducting heavy lift operations. Redundancy improves safety and reliability as well as making the aircraft resilient to external risks. When you combine this intentional design component with the maintenance, operation, and supply chain excellence of Billings Flying Service, you get an aircraft that has an average down time of 2.4%. This means that when you hire a Billings CH-47 Chinook for your heavy lift needs, you will get an aircraft that completes the job safely, on time, and without delays.

Since the late 1960s, The Boeing Company and affiliates have been manufacturing the CH-47 Chinook. Approximately 1,200 CH-47 Chinooks are in operation today, with more that have been historically built for service. Although no match for the tens of thousands of UH-1 Hueys that were built, the volume of CH-47’s produced enabled a global supply chain network. The long history of the airframe has cemented the Chinook’s role into the heavy lift helicopter industry now and well into the future. The Chinook is here to stay with the parts, tools, equipment, and manpower widely available to sustain the aircraft.

In addition to internal cargo, the CH-47 has a forward, middle, and aft external hook on the belly of the aircraft. This flexible cargo hook configuration allows the Chinook the ability to lift multiple objects with ease and stability. The cargo hooks are designed to lift the most strenuous of loads in the most extreme environments. Other aircraft have only one or no external hooks to support your heavy lift helicopter needs.

How much can a heavy lift helicopter actually lift?

Medium duty helicopters are used for the greatest variety of uses including medi-vac, disaster relief, transportation, reconnaissance, attack, agricultural spraying, and lifting. Examples of these include a wide range of Bell helicopters, Boeing Helicopters, AugustaWestland helicopters, and Airbus helicopters. One of the most widely recognized medium helicopter lifter is the Bell UH-1 Huey. The UH-1 Huey is one of the first aircraft in the category “heavy lift helicopter military”. Helicopters in the medium duty category can lift between approximately 1,000 and 6,000 pounds.

Heavy duty helicopters are used and designed for the purposes of carrying large loads that are unmanageable by the other helicopters in the world today. Given the specific form, fit, and function of a heavy duty helicopter, there are naturally a smaller selection of such aircraft. Examples include of course the CH-47 Chinook, CH-46 Sea Knight, Boeing Vertol 107, Boeing Vertol 234, S-64 Sky Crane, Sikorsky CH-53 Stallion, Sikorsky UH-60 Blackhawk, Sikorsky S61 helicopter, Eurocopter SA330 Puma, and the Boeing V-22 Osprey.

Heavy duty helicopters can lift between approximately 6,000 and 36,000 pounds, with the Sikorsky CH-53 Super Stallion leading the way. The caveat for the super stallion is the aircraft is limited to military use without commercial operation. Additionally, the CH-53 Super Stallion has been proven to have much higher operation and maintenance cost as compared to the second runner up…… you guessed it!….the CH-47 Chinook that we all know and love.

Worth noting here are the Russian Mil heavy lift helicopters. Although not widely prevalent in the United States, they are operating in other locations across the globe:
Mi-26 Halo – 44,000 pounds
Mi-10/Mi-6 Harke- 24,000 pounds

The future of the biggest heavy lift helicopters remains squarely between the CH-47 Chinook and the CH-53 Super Stallion. The Super Stallion is Sikorsky’s new heavy lift helicopter and has the ability to lift a greater amount than the Chinook with the same internal cargo dimensions. However, the CH-47 remains a more versatile and affordable platform. With a lower price tag, the CH-47 has a longer history of reliability, use, and production. The CH-47 utilizes the stable and nimble tandem rotor system and has proliferated throughout the world to both militaries and commercial customers alike.

Beyond heavy lift helicopters, the future of helicopters has arrived. Stealth, speed, autonomy, and electric designs are no longer figments of our imagination. An example is Lockheed and Boeing’s Defiant X. The new rotorcraft is a stealthy and incredibly fast platform with the potential to dramatically change the way militaries respond to mission planning. The Defiant X utilizes a stacked dual rotor design for increased lift to carry sling loads and a propulsion rotor in the rear for increased speed.

Although rotorcraft such as the Defiant X, V-280 Valor, and 360 Invictus is changing the expectations of rotorcraft, they are no match to the heavy lift capabilities of the Chinook Heavy Lift Helicopter. Instead, these rotorcraft are more akin to the UH-60 Blackhawk, Apache, and Osprey in the medium duty helicopter category. With the upcoming Chinook Block II manufacturing line beginning, the CH-47 is going to continue to impress the world with its unique chop and indistinguishable characteristics.