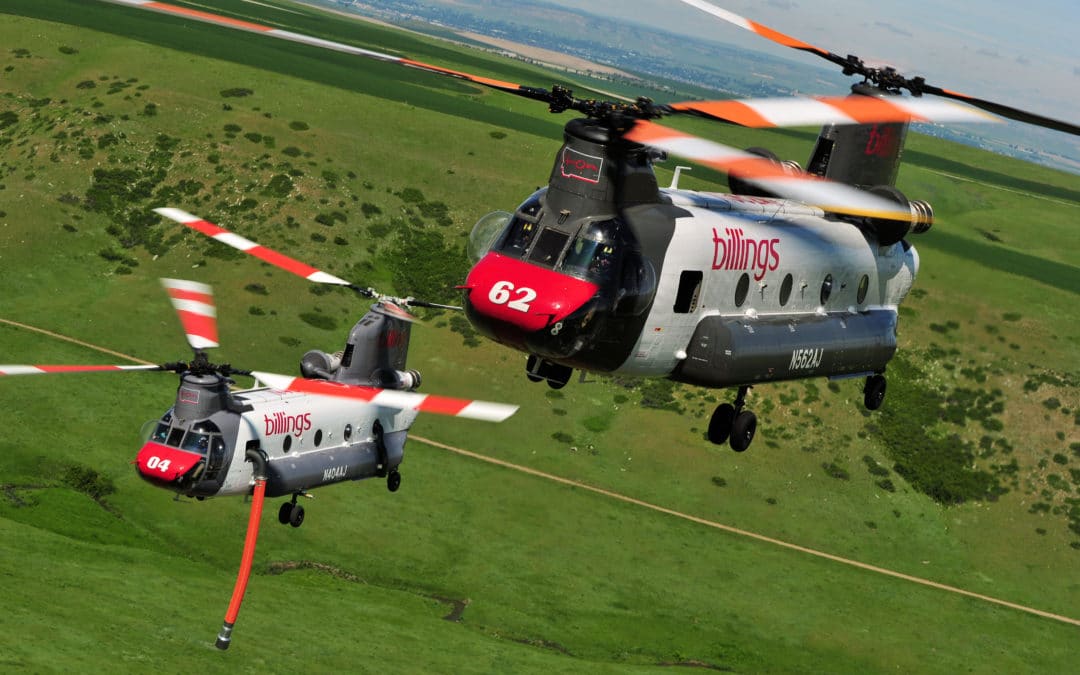 Billings Flying Service is proud to own and operate the CH-47D Chinook. We are passionate about the Chinook and are excited to share a CH-47 helicopter parts guide. Within this guide, you will find part numbers, descriptions, photos, and application of the major components on the CH-47 Chinook.  Billings Flying Service has experience not only with the components listed here, but the entire airframe. We have been operating since 2013 and have accrued nearly a decade of CH-47 specific operational, maintenance, and support experience.

The CH-47 Chinook is produced by the Vertical Lift Division of Boeing Defense, Space, and Security. Within production of each rotorcraft comes the manufacture and assembly of each component. All of the collective components can be categorized into systems: powerplant, drivetrain, dynamic, hydraulic, electrical, avionics, fuel, airframe, and accessory. Over time, components either reach their pre-defined time life, time before overhaul (TBO), or no longer meet expected performance (leaking, seized, cracked, non-functioning, inaccurate, over-temp, etc.). To ensure the CH-47 Chinook continues to fly, the components in each category need to be well understood.

The CH-47D is currently powered by two T55-GA-714A turboshaft engines. The engines are mounted on each side of the aft pylon and drive a left hand and right hand engine transmission. Chemical energy in Jet A fuel is converted to thermal energy by mixing compressed air, fuel, and spark to create combustion. Combustion and thermal energy drives the turboshaft, creating mechanical/rotational energy.

The CH-47 transfers mechanical energy between the two engines, five transmissions, and the forward and aft rotating components via a driveshaft system. For each transmission there is an oil cooler that ensures lubricating oil remains within the specified temperatures. Billings Flying Service is equipped to provide chinook driveshafting and transmission repair and overhaul services.

From the aft transmission to the aft rotorhead is the aft driveshaft, part number 145D3300-6.

From the forward transmission to the forward rotorhead, there is a forward driveshaft PN 145D1301-3.

The forward rotorhead part number 145R2003-10 and aft rotorhead part number 145R2004-20 hold the CH-47’s six blades and interface with the vertical driveshafts and swashplate to propel the aircraft. The splined rotor hub mates with the vertical driveshaft and the pitch housings provide connection points for each blade and hydraulic shock absorber.

The CH-47 Chinook is equipped with a flight control, utility, and landing gear hydraulic systems. The systems are integrated on the aircraft and provide redundancy to ensure safe and reliable operation.

The CH-47 Chinook has both alternating current (AC) and direct current (DC) electrical systems. There is a main oil cooled generator part number 179-60500-11 (alt AE2152MK2) that is driven by the aft transmission. A third generator part number 31161-001 (alt AGH-942-1) is mounted on and driven by the APU. Each generator has a generator control unit part numbers 179-60500-5 for the main gen and  114ES249-13 for the APU gen. Alternating current is 115/200 volts, three phase at 400 hertz delivered to the two AC busses. Alternating current is converted to direct current by either one of the two transformer rectifiers part number 28VS200Y-9 or directly from an on board battery. Direct current is supplied at 28 volts to the five DC busses. If needed, electrical power can be provided from a ground support unit through the ground power receptacle.

Avionics and Instruments of CH-47

Monitoring all the systems and instruments on the aircraft is the master caution panel part number 145ES035-1.

The airframe of the CH-47D is a system of integrated components that are organized by station and water line. The structure is an assembled design of the following among other chinook helicopter parts: frames, formers, bulkheads, stringers, longerons, webs, channels, extrusions, stiffeners, sills, channels, posts, caps, brackets, struts, and skin. To improve strength and longevity, the CH-47F introduced a single piece airframe design. We offer services for maintenance, modifications, and refurbishment of the entire CH-47 airframe.

There are a wide range of chinook helicopter parts in the category of accessory. Accessory equipment on the CH-47D includes the auxiliary power unit (APU) model T-62T-2B, fire detection and extinguishing system, environmental control, winches, cargo hooks, and navigation/communication systems.

The APU provides electrical and hydraulic power support during startup and landing. Fire detection and extinguishing systems are present around the engines and cockpit. The environmental control system provides heat and ventilation for the helicopter via the heater part number B65C30 and associated components. Internal winches support cargo loading and external cargo hooks part numbers 145E5501-5 and 145ES102-5 facilitate sling loads. Depending on the end use of the CH-47, navigation and communication systems allow pilots to meet operational and customer needs.